The Road to Destruction Takes a U-Turn 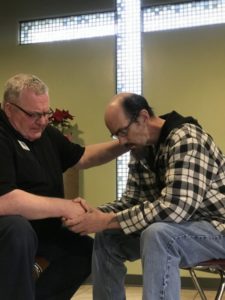 William grew up in a good home, despite his parents having divorced at an early age.

He just got to a point at age 10 where he felt like he didn’t quite fit in. At age 12, he began drinking, and that seemed to be the missing piece. A few years later, he began experimenting with drugs, and that’s when he really began to fit in with a group of friends who were all misfits.

Having worked full-time from the age of 16, William thought he had a plan for life figured out. After graduating from high school, he worked during the day, then would party at night. By this point, he was addicted to harder drugs including cocaine and meth.

William tried a few different treatment programs but would fall into addiction a month or two later each time. Unfortunately, several failed relationships caused added turmoil to his recovery process. During this time he also became a father.

For years, William was stuck in addiction, losing jobs, dealing drugs, in and out of jail for DUIs, and struggling off and on to stay sober. At one point, he even lived on the streets.

With the weather turning cold, Will needed to find safe shelter that had good coverage. “I took my stuff and found a covered alley that was pretty clean, as far as alleys go,” said William. “I ended up living there for about two weeks when a group of people came to talk to me. They convinced me to get some help.”

Having already been through the program at the closest mission in Iowa, William was sent to their sister program in Omaha, Open Door Mission. He joined the New Life Recovery Program.

“This program was different, with classes all day every day, and more rules and restrictions,” William said. “Since I didn’t know anyone, I focused and actually did the Program. I started reading the Bible and even got up to reading for one hour a day. So each week at devotions, I would pound my teacher with questions because I wanted to understand what I was reading. I really fell in love with the Old Testament.”

Through the program, William also learned valuable things in one-on-one counseling and everyday skills like keeping his room tidy.

“The program is amazing,” said William. “And being able to get things for free from the Timberlake Outreach Center and Adopt a Guest was such a blessing, because I came here with basically nothing.”

After finishing the program, William was able to get a full-time job, which lead to his dream job as a forklift driver. He now works full-time with benefits, has his own place, and attends church every week. Slowly, he is rebuilding relationships with his three kids and his mother. His youngest daughter was even able to attend his graduation ceremony.

William truly has experienced lasting change in every area of his life. Thank you for turning hunger to hope this winter in William’s life and so many others!