Making a Difference Because of Lasting Change 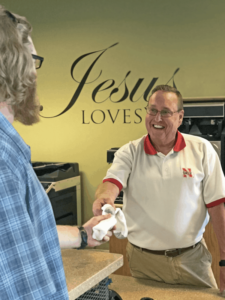 Kirk is one of Open Door Mission’s most faithful volunteers, working six-hour shifts at the Garland Thompson Men’s Center front desk two or three times a week. He shows up early and stays late, spending his time encouraging the men experiencing homelessness. It is a true testament to how radically his life has changed.

Kirk grew up in a small town in Iowa in a loving family, with both parents and two sisters. After high school, he moved to Omaha for college, where he met a friend that would encourage him to go to bars underage instead of attending classes.

Despite his struggle with alcohol, Kirk was high functioning enough to hold down a job at a foam factory for 33 years. He also met the love of his life, and they have been together for 37 years. But one day, an accident changed everything.

Driving while drunk, Kirk hit two other people who weren’t injured, but he broke his neck and had to wear a neck brace for three months. After recovering, he went to court and was sentenced to 90 days in jail. His job let him go, and this gave Kirk a desire to change.

“One of the people I hit was a 16-year-old girl on her way to work,” Kirk reflects. “I could’ve hurt her, or worse, killed her or someone else.”

Kirk tried an out-of-state program that he had to pay for out of pocket. The 30-day program wasn’t long enough to address his life issues.

“My girlfriend told me, ‘This is it. One more try.’ She had given me so many chances, and I wanted to do it for her,” said Kirk.

He had heard about Open Door Mission and came down a couple of times to learn about the program. Finally, Kirk joined the New Life Recovery Program on a Monday morning.

Despite several difficult days, Kirk came to know the staff members and the other men in the program. He came to enjoy the process, especially meeting with David, Discipleship Counselor.

“I wasn’t exposed to faith growing up,” Kirk said. “But David and I had this meeting in his office where we talked. I remember this rush of wind went through me. I believe it was God. He just came right into me. I just glowed after that, and I felt so good about everything. Every time I sing, I thank him so much.”

After six months, Kirk graduated from the program. His girlfriend and older sister came to support him. And two months later, Kirk returned as a volunteer.

“I compare it to a booster shot: I help out, but it helps me, too,” said Kirk, lighting up. “It gives me a little kick and reminds me that God’s still with me and that I can’t drink. I love coming here at 5:00 a.m. when the guys are just waking up, telling them good morning and trying to bring them a little bit of cheer…I care about these guys.”

During his time at the front desk, Kirk also has a lot of interaction with donors and volunteers. “I love when volunteers from the community come in! Some families will bring their kids to make sandwiches, and they love helping. I just adore it, and it really does help.”

Fifty-four months ago, Kirk began the New Life Recovery Program, and his only regret is not starting it sooner.

“When I graduated,” Kirk said, “I just knew I had such a good foundation with all the tools and everything that I knew that I couldn’t [drink], and I didn’t want to anymore. I was much stronger. That’s why I love coming to Open Door Mission and helping these guys if I can.

Thank you for providing Hope for the Hungry this holiday season, so people like me can experience lasting change.”