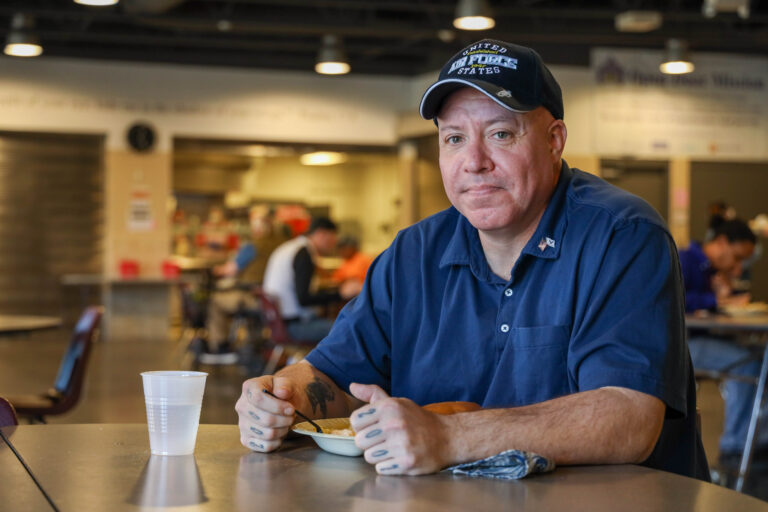 It was an early morning when Alfred found himself on the Open Door Mission’s front door steps. He had no shirt or shoes on and Alfred knew that if he didn’t get help, he was going to die.

Life was not always this way for Alfred. Growing up Alfred had a great childhood, and was raised by two supportive parents. Alfred’s father was in the Air Force and it was Alfred’s dream to one day follow in his footsteps. Immediately after Alfred’s High School graduation, he joined the military and served for 7 years in the United States Air Force.

Alfred eventually married and became a father, he also graduated with his bachelor’s degree and started his own company. However, when Alfred’s marriage ended, he began drinking to cope with the unsettling depression that overwhelmed him during this season of life.

“My drinking became worse and the depression deepened” says Alfred, “Eventually I was arrested on a DUI stop and spent several months in jail while falling behind on my bills and mortgage.”

After losing his house, Alfred began living in and out of homelessness. Alfred sought help at the Omaha Department of Veteran’s Affairs who connected him to Open Door Mission. When Alfred first came to Open Door Mission, he was still heavily drinking alcohol on a daily basis and sought addiction rather than deliverance.

“When I left the Open Door Mission the first time, I lost hope for myself and started drinking more than I ever had before” said Alfred, “I was mentally, emotionally, and physically drained.”

A few nights later, Alfred began drinking so much that it carried into the next morning. This is when Alfred stumbled back to Open Door Mission and was in really bad shape. Alfred believes it was by the grace of God that he made it to the front door steps. The Men’s Ministry Director Pat found Alfred outside without his shirt or shoes on. That is when Pat told him that if Alfred did not give up this lifestyle and find help, then Alfred would surely die.

Alfred decided to trust in the Lord by joining the New Life Recovery Program. Alfred’s character and outlook on life has changed through sobriety classes and Biblical teaching at Open Door Mission.

“I feel like a burden has been lifted off my shoulders since I have been at the Open Door Mission” said Alfred, “I have found HOPE at this place.”

For the future, Alfred will faithfully work on his sobriety and offer help to those with similar struggles of alcohol abuse. He also is reconnecting with his son and is continuing to develop as a loving and consistent father.