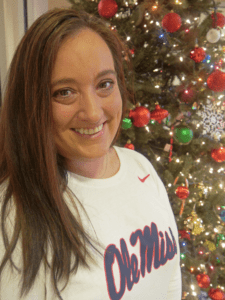 This month, Stephanie began Open Door Mission’s WorkNet Program, the final phase of the New Life Recovery Program focused on job-readiness. And she couldn’t be happier.

Stephanie grew up in an unhealthy Arkansas home. Her father was her best friend, but his alcoholism and drug use made him emotionally unavailable. At age 17, he also became Stephanie’s supplier. He soon passed away in front of her, causing a downward spiral in Stephanie.

Attempting to get a fresh start, Stephanie and her boyfriend moved to Omaha, closer to his family. However, the cycle of addiction was difficult to break. Stephanie lost custody of her two youngest children. She and her boyfriend ended up homeless, living in a storage facility during the coldest months of the year or staying with their drug dealer.

It was all too much. Making the decision to both seek treatment, Stephanie came to Open Door Mission.

“My boyfriend gave me a Bible before I came here, but I didn’t want anything to do with God,” Stephanie said. “That first week, I was so scared. Everything was new and intimidating. But each day I felt more confident that I could do this. People around me were happy for me, for the first time.

What really changed things for me was Miss Pauline’s Bible class. For the first time, I was inspired to learn the books of the Bible and excited to recite my memory verses. I started to have real faith that this could be real.”

Stephanie has found a love of helping people and enjoys volunteering at the Lydia House front desk. And, the most important thing to her, she has resumed visits with her children.

“I want to be a better mother for my kids,” said Stephanie. “They’re blessed to have grandparents watching them now, but I look forward to giving them so much more. Through the Adopt a Guest Program, they’ll get Christmas presents, which is amazing.”

Her son is hoping for a Puppy Dog Pals blanket under the tree this year.

“Coming here was the best decision I’ve ever made,” said Stephanie.” Being here has benefitted me in a positive way. Now I can’t wait to be the mom my kids deserve.”

Thank you for making Christmas shine brighter for families like Stephanie’s this year. You truly are providing Hope for the Hungry, Hope for the Holidays!