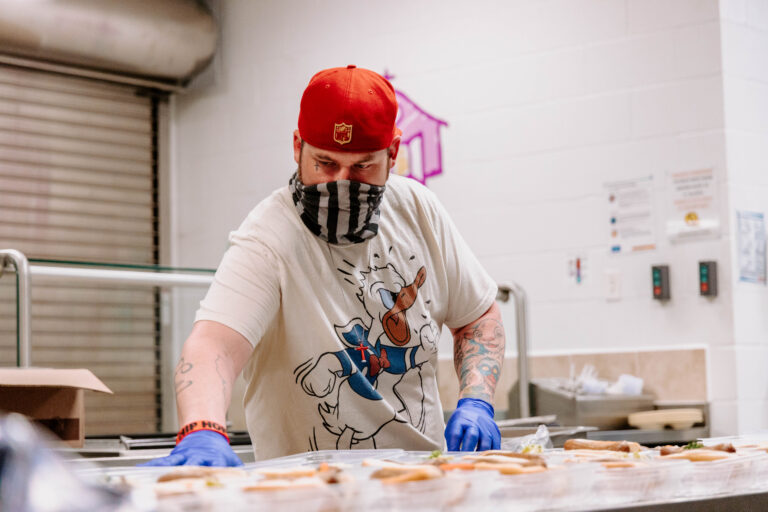 Josh is a student in the New Life Recovery program and has grown to be a reliable volunteer in the kitchen. His story is a testimony to God’s faithfulness in his life on a journey toward recovery.

Born in California, Josh had a difficult upbringing. Since both parents were absent from his life, Josh was raised by his loving grandfather. As Josh grew up, he found his own footing and life seemed to be going quite well until Josh was injured in a motor vehicle accident.

“When I was injured, my doctor began prescribing me OxyContin and I became addicted immediately,” said Josh, “Once my doctor took me off the pills, I looked for something to take over my addiction and that was when I turned to heroin.”

Josh’s addiction progressed through many seasons, even continuing into his marriage and fatherhood. Though he had made several attempts at sobriety, his habit only grew worse. Josh was eventually arrested for drug possession and sentenced to jail time. He had to come to a breaking point before he began to find real change.

“When I finished my sentence, I had nowhere to go and my wife said I needed to change, I know I did too,” said Josh. “I kept hearing about the Open Door Mission’s program and I knew that was where I wanted to go.”

When Josh first entered the building of the Garland Thompson Men’s Center, he knew this place was different. He could see everyone smiling and laughing. He also enjoyed the welcoming community and how people genuinely enjoyed being at Open Door Mission.

“I ended up joining the program and since then I have been able to see a restoration in my own life,” says Josh. “My faith with God is 100 times stronger, my marriage is being repaired, and I am becoming a better father.”

Josh is thankful for the program and is especially grateful to be able to serve in the kitchen because it has positively shaped his character. Volunteering in the kitchen has helped him develop his work ethic and taught him to be consistent and faithful in the little things.

As for the future, Josh is striving to graduate from the New Life Recovery Program and to use his new found skills and faith to become a diligent husband and father.

Josh says to those considering donating or volunteering at Open Door Mission, “Your service and lifesaving donation is an investment into every man, woman, and child that lives here.” We Thank You!

In everything I did, I showed you that by this kind of hard work we must help the weak, remembering the words the Lord Jesus himself said: ‘It is more blessed to give than to receive.’ ~ Acts 20:35