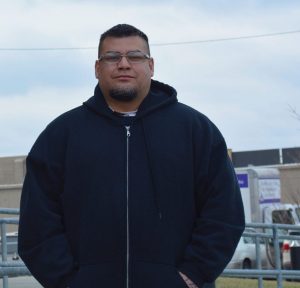 Larry found himself in the back of a patrol car on his way to a holding cell. When he was pulled over, his car was filled with guns and drugs. As the officer ran Larry’s license to confirm who he was dealing with, Larry could only think, “How many gun charges do they have on me already?”

Larry uttered the only prayer he could think of while being arrested: “God, help me.” By the time he was at the police station, he determined to use his phone call to get in touch with his Aunt Mona. She didn’t beat around the bush.

“Larry, you need to get a Bible, get on your knees, and ask forgiveness. You need God in your life.” That was the turning point that drove Larry to begin a serious journey toward finding God – and eventually to Open Door Mission.

When Larry was 15, his best friend committed suicide. Larry tried meth for the first time the next day, and lived life on the edge for years after: selling drugs and weapons, robbing convenience stores, roughing up anyone who got in his way. “Every night was bad. The lifestyle got to me. I just couldn’t do it anymore.”

After his arrest, Larry spent almost a year in the jail system. He was finding out about God, and getting to know the Christians around him. Larry then met Pat McKernan, the Men’s Center Director at Open Door Mission. Pat shared with him the opportunity to join the New Life Recovery Program.
At the Mission, staff members helped Larry discover better ways to cope with some mental health issues he had dealt with for years and encouraged him to see himself as a person worth redeeming. Larry worked with the staff and his peers through the difficulties of mental illness while still making progress through Open Door Mission’s recovery program. It was rough, but Larry made it.

Today Larry is clean and sober. He lives in his own home with his small family, and has made great strides re-establishing relationships with his daughters from previous relationships. “I’m still alive. I get blessed all the time. A lot of my friends look at me and say, ‘Hey! You’re doing good!’ Some of them are using me as inspiration to get sober themselves.

“I have a better relationship with my parents and kids than ever before. I spend time by myself with God. He will keep me growing, and keep me sober.”

“For I know the plans I have for you,” declares the Lord, “plans to prosper you and not to harm you, plans to give you a hope and a future.”

Read more stories like these and Mission happenings HERE.

HELP OUT
Scroll to Top