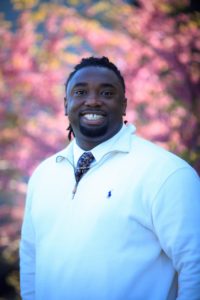 DeCarlos grew up with separated parents, both in the military, meaning his childhood was full of moving. In high school, his father made DeCarlos choose between grades or work and he chose to leave high school before graduation to focus on work.

He joined the Job Corps at age 16, earning his CNA and devoting himself to work.

In 2013, DeCarlos reconnected with his high school sweetheart, who had been in the Job Corps with him. They fell in love, got married, and lived in Florida, but something kept coming between them. DeCarlos’ addiction to alcohol.

Eventually, DeCarlos’ wife, at the time pregnant, took their older son and moved to Iowa, hoping for change. DeCarlos followed, believing that he could overcome his addiction on his own.

During a short stay in jail, DeCarlos heard from several men that the program at Open Door Mission could help him make a lasting change in his life.

“These guys knew who I am as a sober man, and kept telling me how it had worked for them. They believed that I could do it, too. That really encouraged me to give it a shot.”
DeCarlos was released from jail to Open Door Mission, he joined the New Life Recovery Program, and began work on his GED.

“Through the program, I learned that there is more to being sober than to just stop drinking,” said DeCarlos. “There are three parts: the addiction, your mentality, and your emotions. Through prayer and my time at the Mission, I’ve learned to be strong-minded and keep my emotions in check. I don’t linger on the past, but focus on the future and try to forgive quickly.”

“My relationship with and love for my wife has grown so much,” said DeCarlos. “We endured the hard times and have overcome, which has made us stronger.”

In May, he graduated from the New Life Recovery Program and attained his GED. DeCarlos is active at his church, singing on Sundays, fellowshipping with the men, and volunteering to clean on the weekends. He and his family are moving back to Florida next month to be closer to DeCarlos’ first son.

“The older you get, when you look back, you start to see things come together and see why things happened,” said DeCarlos. “I know now there’s a reason why everything had to happen. God brought me here to teach me.”

DeCarlos is grateful for each donor and volunteer at Open Door Mission.

“Keep coming back and keep putting smiles on people’s faces, because you never know what people are dealing with,” said DeCarlos. “Sometimes all it takes is one smile to change someone’s perception for the whole day.”

Thank you to each of you for putting smiles on people’s faces, people like DeCarlos, who desperately need it.