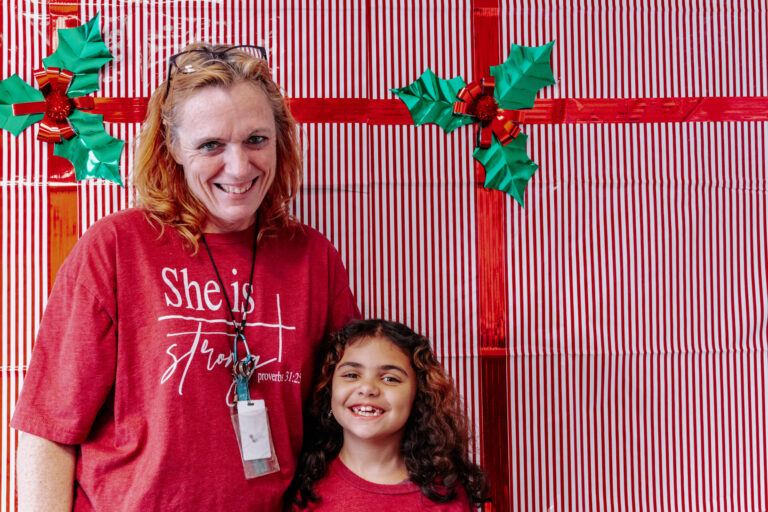 Celebrating Christmas at the Open Door Mission is one of the greatest gifts that Christina and her granddaughter Ariel will receive this year.

Growing up in Sacramento, California, Christina had an exciting childhood with two dedicated parents. Everything seemed to be going well until she was introduced to marijuana in her teenage years. Her drug use turned into a habit when several family members suddenly died.

As Christina grew up, she eventually met the man who would become her husband. They started a family of their own. Then tragedy struck: her husband passed away unexpectedly. It brought about the old familiar sadness that Christina had known all too well in her younger years. It was not long after this that Christina was introduced to meth and used it to cope with the pain, hurt, and loss.

“My addiction became so bad that I stayed in a meth house” said Christina, “I kept trying to get clean on my own but it never worked out.”

Over the years, Christina’s situation just seemed to get worse.  She was tired of living in poor situations and feared that she may lose her granddaughter, Ariel. This is when Christina reached out to a case manager in the community and was connected to the Open Door Mission’s Lydia House. Shortly after, Christina and Ariel moved into the Lydia House. Christina soon joined the New Life Recovery Program.

“I knew from the moment I arrived at the Lydia House that Ariel and I were going to find healing in this place” says Christina, “The Open Door Mission is exactly where I needed to be.”

Christina has been able to apply new impactful tools in the New Life Recovery Program through being fed in spiritual, emotional, mental and physical ways. Over the last several months, the bond between Ariel and Christina has grown and been reshaped with God’s love. As we near Christmas, Christina is very grateful that God brought her to the Open Door Mission.

“I really believe that my granddaughter, Ariel, and I would not be having a Christmas this year if it was not for the Open Door Mission and our community who is always giving” said Christina, “In fact, I may have lost Ariel if my life kept going the way it was prior to the Mission.”

Now that Christina has found recovery, she has her eyes set attending a counseling program at UNMC. Currently, she is enrolled for classes at Metro Community College. She desires to counsel and help those with drug and alcohol addictions. Christina is also set on giving back to the Open Door Mission by serving other women with similar struggles.

“I am so thankful that the Lord has walked with me through this journey” says Christina, “Jesus has brought me to this place and my family is blessed.”

We at the Open Door Mission are thankful for those who faithfully give to families like Christina and Ariel and we hope each of you have a Merry Christmas!

She is clothed with strength and dignity;  she can laugh at the days to come.  ~ Proverbs 31:25