A panhandler in Omaha recently stabbed a man who wouldn’t give him money.  While the man escaped with only a small wound and didn’t require stitches, the incident shines a light on Omaha’s often over-looked panhandling problem.
The Omaha Police Department is asking the Omaha City Council to toughen current panhandling ordinances with an aim to reduce aggressive panhandling.
Under the proposal, several forms of panhandling would be illegal, including: asking for money within 15 feet of an ATM or other location where money is dispensed, following someone to ask them for money, repeatedly asking the same person for money, panhandling on private property, and panhandling in street traffic.
However, is this the best route to take?  Candace Gregory, President and CEO of Open Door Mission, told WOWT 6 News she opposes the proposal.  She said, “I don’t believe writing someone a ticket, putting them in jail, [or] putting them through the judicial system is really the solution.”
Instead, Gregory wants the city to focus on helping panhandlers find assistance and job training programs.  She also encourages generous people to think twice before giving money to panhandlers, many of whom she said may not even be homeless.  She said most are actually addicts who use hand-outs to feed their drug and alcohol habits. 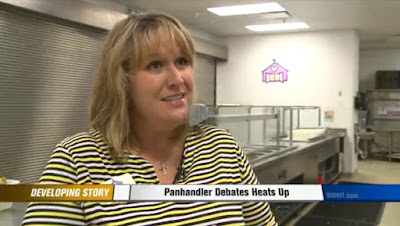 “You have to understand [that] this is their job,” she said.  “Panhandling is their job, and we’re conditioning them.  We continue to give them that dollar, and they go out and can buy an open container and they can do that time after time and all day long.”
WOWT 6 News also spoke to Jeannine Harvey, a young woman who said she used to live and panhandle on Omaha streets.  She too doesn’t agree with the proposal before the City Council.  She said, “If they’re going to outlaw panhandling, then they need to come up with another idea to help homeless.  It doesn’t have to be all big ideas, just get more people to come down and give them food so they’re not panhandling.”
Rather than giving money, Open Door Mission encourages people to give panhandlers Compassion Cards which provide details on where to find free transportation to the Mission.  There, these people will receive hot, nutritious meals, safe shelter, and other forms of assistance and recovery help such as life-changing programs.

This story is adapted from WOWT’s Brandon Scott’s article Omaha Could Soon Crack Down on Panhandlers.  Click here to read the original story.

Yesterday was Pie Day, do you like pie?  Pie tends to be a “special” dessert, served on Thanksgiving and other celebrations. Most of the time we think of pie as a sweet treat, but there are savor...

January is National Soup Month…a great month to enjoy your favorite hot and comforting soups. Soup dates back to 6000 B.C. and was made from hippopotamus. Soup has long been considered a food with h...