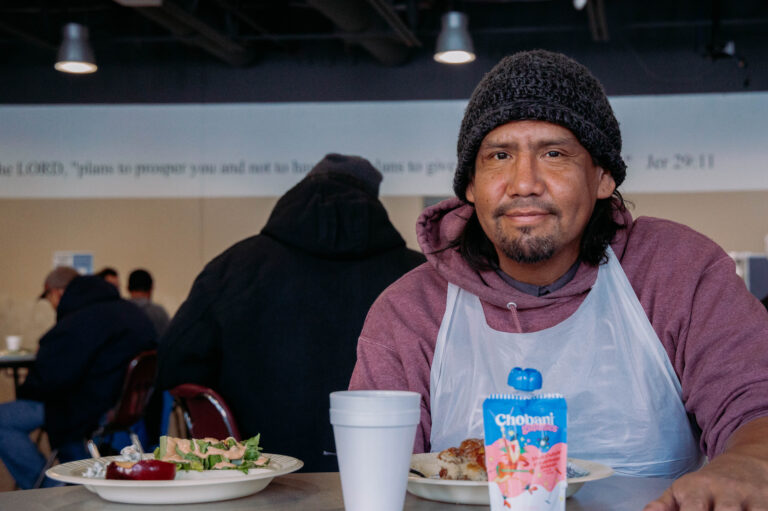 Shelter for the Winter Night

Alex describes his upbringing with “lots of love in the house” because of his parents and the family he was a part of during his early years. Raised in Omaha, Nebraska, and a member of the Omaha Indian Tribe, Alex had a seemingly bright future ahead of him. At the age of 10, older kids in his neighborhood began influencing Alex in the wrong direction and he began drinking alcohol which soon developed into a habit.

When Alex moved out of his house after graduating high school, he began to move all throughout the United States. Alex eventually married and the pair decided to settle down back in Omaha. The two remained married for 23 years but unfortunately the marriage fell apart.

“I fell into a deep depression and started drinking again to cope with the hurt,” said Alex, “I eventually sold our house and burned through the money in less than 6 months.”

After this, Alex fell on hard times and found that maintaining a job was difficult due to his issues with alcohol. Alex began living homeless for the first time.

“I began camping out in a field off 72nd and Maple” says Alex, “I started to panhandle and would use the money I made to buy more alcohol.”

As this cycle progressed over the next 2 years, Alex suffered severe frostbite during some of the coldest months. This past October, as the first snow storm took Omaha and Alex by surprise, Alex nearly lost all of his toes while sleeping one frigid night. Alex became very sick that night due to a large amount of alcohol consumption and his declining health.

“I was barely able to move and was hurting so bad, I knew if I did not find help, I would have died that night” said Alex, “I checked into the hospital and remained there for several days because I was in such bad shape.”

As Alex recovered that night, his cousin visited and told him about the Open Door Mission and its New Life Recovery Program. Alex was tired of sleeping out in the cold and wanted to get treatment. He was immediately accepted and was given his own room and bed the next evening.

“That was the first bed I had slept in, in over two years, it was amazing!” said Alex, “Everything has changed since that day, I feel restored physically, spiritually and mentally.”

As a New Life Recovery Student, Alex has seen much change in his life and is now in good spirits. For the future, Alex feels contentment with the program at the Open Door Mission and satisfaction with the community it has given him.

Thank you to all of Open Door Mission partners that give with their hearts so that people just like Alex have safe shelter and quality care that breaks the cycle of homelessness and poverty.