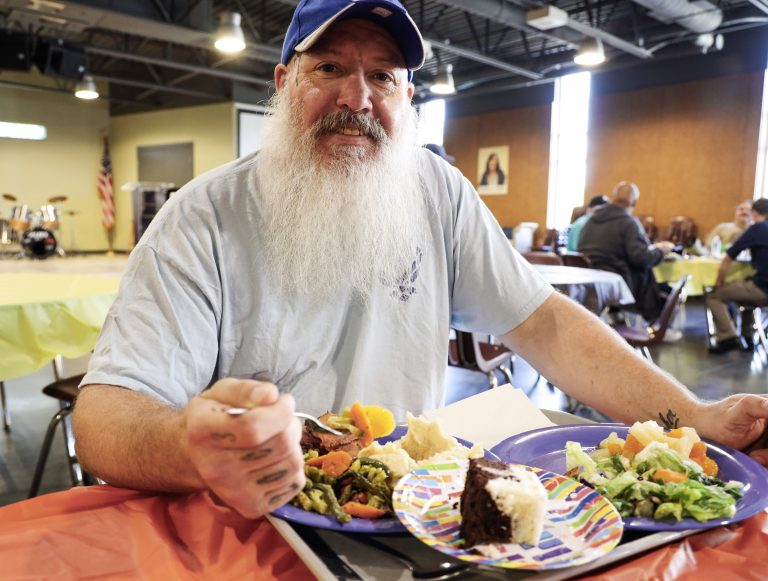 Never Too Late to be Transformed

Alfred’s road to Open Door Mission was unique in many ways. Growing up in Indiana, he joined the Air Force shortly after graduating high school. After seven years of service, he left the Air Force and developed an impressive career in IT until beginning a successful business of his own. He also became a husband and father. But things suddenly began to change for Alfred after his marriage ended, and he found himself in a deep depression.

Following his divorce, Alfred relied heavily on alcohol to cope with the pain he was feeling. Unfortunately, his depression only deepened, and his reliance on alcohol continued to grow and he became a functioning alcoholic. A DUI stop lead to Alfred’s arrest, triggering a downward spiral that led to homelessness.

Alfred was first introduced to Open Door Mission after finding himself in a VA emergency room, but he didn’t stay.

For the next year, Alfred’s drinking became so bad that he was on the verge of death. By the grace of God, Open Door Mission staff found Alfred alone on the streets and brought him back to receive the help he desperately needed.

Alfred became sober at Open Door Mission, and returned to his career once he felt ready. Though he maintained sobriety for a time, persistent mental health challenges stuck with Alfred, and he eventually relapsed. This time knew exactly where to turn to receive the help he needed.

“Open Door Mission welcomed me back with open arms,” he said. “There was no judgement, they just wanted to make sure that I was okay.”

Alfred has since received treatment for his mental health challenges and is celebrating sobriety with the support of those around him. Now Alfred is happy to move on to the next chapter of his recovery journey. He will soon return to work with a new perspective on his continued sobriety.

“Before Open Door Mission, I never knew how to ask for help with anything,” said Alfred. “This place has saved my life on more than one occasion, and I know they’re always here to keep me on track.”

As he returns to work, Alfred will continue growing in his recovery and giving back to others by regularly volunteering on Open Door Mission’s campus.

Your support of Open Door Mission is what allows veterans like Alfred to find the help they need in dark times. Thank you for caring!

For as high as the heavens are above the earth, so great is His steadfast love toward those who fear Him; as far as the east is from the west, so far does He remove our transgressions from us. ~Psalm 103:11-12