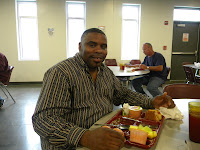 Frank was able to hold a good job until his occasional drinking became a breakfast and lunch time event. He started hopping from job to job, never admitting that his drinking was the cause. Alcohol became his “medication” against pain and hurt he didn’t want to face. His family, loving him unconditionally, tried to help him face his drinking addiction. He refused to see the truth, even when he was stealing from them to support his drinking. Once again, broken promises to himself, his son, his family and his mother.
Frank was never homeless on the streets because he lived in his mother’s basement; but he admits, she was ready to practice “tough love” and send him to the streets because of his drinking and behavior. Frank has seen several of his friends die from alcohol related deaths. He was ashamed, so tired and weary of the lifestyle he had chosen that he decided to go to Open Door Mission. He heard it was “a good place” and maybe he could just sleep until he was sober.
Promises Kept…
At Open Door Mission Frank found more than just a bed, he found staff that wanted the best for him and clients that were successful in overcoming addictions. He, also, discovered that he didn’t know the best plans for his life–God did.  Frank has been at Open Door Mission for 12 months and sober for 9 months. He is no longer ashamed of himself; he is forgiven by God, his son, his family and his mother. He has learned not to be selfish and to completely trust God’s plan and promises for his life.
Frank enjoys worship and fellowship at Eagle’s Nest Church and feels blessed to have a mentor, an Open Door Mission volunteer, who helps him grow stronger in the Lord every day. He is no longer lost and ashamed. Frank keeps his promises to God and his family — to stay sober and to tell others about his new life in Christ. He does this because God has kept His promise in John 3:16, Frank’s favorite verse. God’s promises are kept …and now, so are Frank’s.

John 3:16 — For God so loved the world that he gave his one and only Son, that whoever believes in him shall not perish but have eternal life.

William grew up in a good home, despite his parents having divorced at an early age. He just got to a point at age 10 where he felt like he didn’t quite fit in. At age 12, he began drinking, and tha...

Martin Luther King’s quotes on the importance of volunteering. Life’s most persistent and urgent question is, ‘What are you doing for others?’ Everybody can be great…because ...