This coming Sunday is Palm Sunday, a Sunday we celebrate with jubilation. We are told in the Bible of all the happy crowds unashamedly shouting Hosanna to the King. Jesus was hailed as the King as the colt carried him into the city. Palm branches were waved and laid to make a royal pathway. Would you have been there with the crowd, happily shouting for your King of kings? Would you be caught up in this joyous crowd? 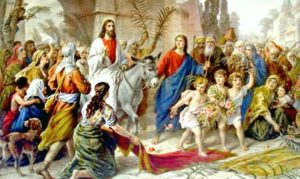 Where were these joyous crowds a few days later as Christ carried the Cross through the streets to Calvary?

Would you now be in the crowd of people shouting insults and crying out “crucify him”? Would you be one of those shouting for Barabbas to be released so he could entertain you in gladiator tournaments? At the cross would you be part of the crowd still mocking Jesus to “ask His God’ to save Him; or would you be weeping and praying? It is so easy to get caught up in “crowd mentality”. What a great example to show the importance making sure you are with the right crowd and supporting your true beliefs.