Did you know that chili was once considered a food of the poor and working classes?  Chili is a generic term for a concoction of chili peppers, whatever meat is available (any varmint that lived in the Midwest) and various herbs and spices. Chili began to make “official” appearances around 1850 with the push to the west for adventure and gold.  Chili was cheap and filling, the perfect dish for those with little money, but hungry. 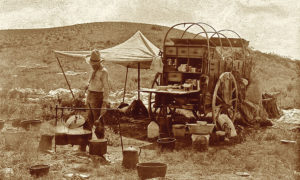 By the 1860’s Texans had claimed that they created chili. It is more likely the rise of various chili recipes came from the Mexican “Lavanderas” or washer women that followed the cattle trails. The women developed their unique recipes, and started adding beans to stretch the food budget. Then onion, garlic and a variety of peppers to go from mild to very spicy.  The competition to make the best chili started on the cattle trails. Chuck-wagon cooks had their special recipes for chili, feeding hungry cowhands and keeping them happy was a must. The jails in Texas served a lot of chili too, it was cheap and filling. The prisons were soon rated by the chili they served. Released inmates often requested the prison’s chili recipe before leaving. Chili competition has been around for 200 years.

Today chili is a favorite in shelters too.Chili is easy to make and fairly inexpensive. It can be “stretched” to feed more by adding other ingredients. No longer just for those living in poverty, chili is served around the world from palaces to soup kitchens. Recipes are guarded and the competition to have the “greatest chili” is an annual event. Do you have a favorite chili recipe? Do you belong to a “Chili Club”? Volunteer to come make and serve a comforting batch of chili at Open Door Mission. I know Gary would love your help.